Obviously this blog has been dormant for a while. Last year I was teaching two technology classes in addition to my music classes. It was a lot more work than I expected! It was fun, but the extra teaching responsibilities ate up my blogging time. This year, I am not teaching tech because it doesn't fit in my schedule. So....I'm back. Thanks to fellow blogger Christopher Russell of the Tech in Music Ed Blog, I've also discovered Blogsy for posting to the blog from a mobile device. That is making blogging so much easier!

This summer I've been thinking about new ways to incorporate technology into my lessons. I've been using SmartMusic with my recorder players. They have the Recorder Express book I love. I'm not really wanting to pay for the SmartMusic subscription this year though. I found another tech source that utilizes Recorder Express. It's an online game where kids play their recorder to activate the game. Here a short intro video about it.

Students create an account and have access to the first nine pages for free. After that they can purchase additional pages. The entire Recorder Express Game can also be purchased at West Music or other music stores for $14.99.

The really cool part about this is that students can connect their accounts to your account and you can get reports about how much time students have been practicing while playing the game. I plan to award special badges in Edmodo for students who play the game outside of the school day. I'll post more about other ways I'm using Edmodo in another post.

If you want to create a free teacher account to see more about the Recorder Express game, you can go to the JoyTunes website. Using this link will help my students gain access to additional music in the game.

Posted with Blogsy
Posted by Mrs. Jahn at 9:48 AM No comments:

Email ThisBlogThis!Share to TwitterShare to FacebookShare to Pinterest
Labels: Recorders 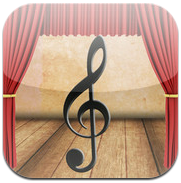 Treble Cat HD 1 is a free app which allows students to practice quick recognition of notes on the treble staff. Notes move across the staff and the user is asked to touch every C in 60 seconds. In this level, all pitches are labeled. The next level asks you to touch the Cs and Ds in the 60 second time limit. In this level, the Cs are no longer labeled, but the other pitches are. The labels are present until each note has been introduced. Once that pitch has been introduced, the labels disappear for that pitch. The settings allow you to choose if you would like letter labels or solfege labels. It also allows you to choose the speed of the game.

I can see some value in this game for increasing the speed in which students recognize notes. At this point, the app makes a positive chiming sound when you touch a correct pitch. I wish it would actually play the pitch you touch, a C plays when you touch a C, etc. Perhaps that is something the developers will address in a future update.

There is an in-app purchase which allows the user to upgrade to the full game for $2.99. I have not upgraded at this point and have not evaluated the paid version of the game. If you are allowing students to use your iPad, please be sure you have turned off in-app purchases in settings.

I mentioned another drill-and-practice note recognition app, Flashnote Derby, last September. This app is a better choice if you wish to limit the pitches in which you want students to focus.
Posted by Mrs. Jahn at 11:06 AM 3 comments: 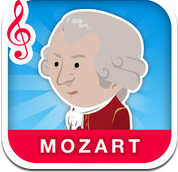 Mozart by Radio Classique is another app I grabbed when it was free for a day. Right now it is listed at $3.99. There are three different sections of the app:

Story - This is a narrated and slightly animated story of Mozart's life. You have the option to look at the text as it is being read to you, but you need to pull down a tab on each page to do that and it does cover up part of the illustration. The information is good, but the narration bothers me. It is very stilted, robot-like as if it is being read by a computer and not a recording of someone. There are some things that are pronounced strangely (27th sounds like twenty-thevents). If I were using this in the classroom, I would mute it and read it myself, which means you don't get the nice Mozart background music, but it's better than the irritating narration

Works - There are excerpts of The Marriage of Figaro, The Magic Flute (2), Requiem (2), Ah vous dirai-je maman, Symphony 38, 3rd mvt, Clarinet Concerto, and Abduction from Seraglio. Having these excerpts at your finger tips may be worth the price of the app since you could not purchase all of those on iTunes for less than $3.99.

Games - This contains a multiple choice quiz based on the information in the story, instrument cards to which you match the correct sound of the instrument, a Where's Waldo-esque game of searching for specific items in a picture., and game called Notes which is like the old game Simon where you watch and listen to notes that are illuminated and then play them back in the same order. One thing I noticed about the instrument cards game is that the tuba is called the bass horn. I think this app may have been developed in France and instruments may have different names there.

The developers of this app have also created an app about Beethoven.
Posted by Mrs. Jahn at 7:44 AM No comments:

I downloaded Little Fox Music Box just the other day because it was Apple's Free App of the Week. It's a very nice looking app. There are three songs (London Bridge, Evening Song, and Old MacDonald). There is an option to have the song sung along with the text or to sing karaoke-style where the words are highlighted in time with the music, but the user needs to provide the singing. There is also an area called Fox Studio which has "found sounds" such as bottles, teapots, spoons, etc. for the user to use to create music. I see limited use for this app in the classroom unless you teach preschoolers, but I know my preschoolers at home will love it, so it will keep it's place on the iPad. 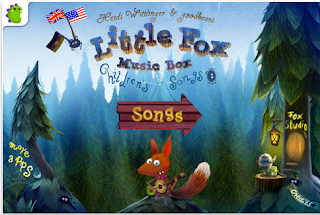 I have a problem and may need an intervention. I have a LOT of random apps on my iPad and no idea what they do or how they work. The problem is because I learn of an app that has a reduced price or is free for a limited time and I immediately download it regardless of whether I have time to explore it or not. The result is a crazy amount of apps that are never used. I need to start going through them and figuring out which ones are useable and which are not. I'll use this blog to post about the ones I have that are music related. I'll start with Little Fox in the next post.
Posted by Mrs. Jahn at 8:05 AM 2 comments:

Good morning. Yesterday I had a post published on FreeTech4Teachers.com about the use of a single iPad in the music classroom. Welcome to those of you who have found this blog due to that post. This blog has been semi-dormant in the last few months partially due to the chaos of the end of the school year and to the start of summer vacation. I hope to be a little more diligent in posting now. I will be posting about some music-related iPad apps in the near future. Stay tuned...
Posted by Mrs. Jahn at 7:53 AM No comments:

What a goldmine! Have you looked at the tutorials on Butterscotch.com? I'm planning an iPad GarageBand project with my 5th graders at the end of the month, so I am using the tutorial for GarageBand for the iPad to help me plan it out. It's superb. It's 40 minutes long, but broken into eleven parts so you can watch a little at a time (and skip the parts you aren't interested in). I highly encourage you to check it out.