I learned of this app from Dr. Christopher Russell's blog, Technology in Music Education. Dr. Russell did a very comprehensive review of DoReMi 1-2-3 and there isn't anything additional I can add, so I encourage you to read his review to see if the app may be of use to you in your classroom. 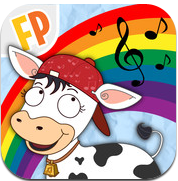 Oh my goodness, this was a long process. It turns out that it is probably more of an issue with my home internet though. After completing Step 2, there was something like 8000 songs in my library that iTunes was not able to match in their store. That means the rest of the library needed to be uploaded. I expected this process to take a while, but not nearly as long as it actually did. Songs were uploading at a rate of about 100 songs an hour. I think that the computer went into hibernation mode the first night it was working on it, so it quit working during the night. I was nervous about unhooking the external hard drive (that houses my iTunes library) so that I could pack up the laptop and take it to school the next morning. I was afraid I might have to start the whole process again. I decided to bite the bullet and do it though.

The bad news is that I discovered the wireless Internet access in my classroom was not working. Which meant I was at a complete stand still until I got home that evening. So I went home and started it up again. It does need to go through Steps 1 and 2 every time you re-connect. However, it goes much faster than the initial time. It also will continue where it left off for Step 3. The bad news is that I was back to the same snail's pace for uploading. I did turn off the hibernation option for the laptop so that it could work all night long.

That brings us to this morning. I unhooked everything and packed up for school. The wireless internet was working again. And....I was able to upload the remaining 5000+ songs in about 3 hours. Hooray! I also started the process on my school computer which has a separate iTunes library, so I will be able to combine the two. When I opened up iTunes Match on the school computer, it appeared that I would need to pay the $25 again. I was a little nervous that I would be charged again, but it asked for my Apple ID and password and then gave me a message that I had already subscribed. Because there are a lot of duplicate songs between my two libraries, I expect adding the school computer will be much faster (especially considering the upload speed at school compared to my house).

I have now activated iTunes Match on my iPhone and iPad, plus my school desktop computer and my school laptop. This combined the two iTunes libraries I had. I'm really hoping this will make lesson planning easier since I can access any of my songs from any school device I am using. I'll try to update again after I've had a chance to try things out and see how they are working. 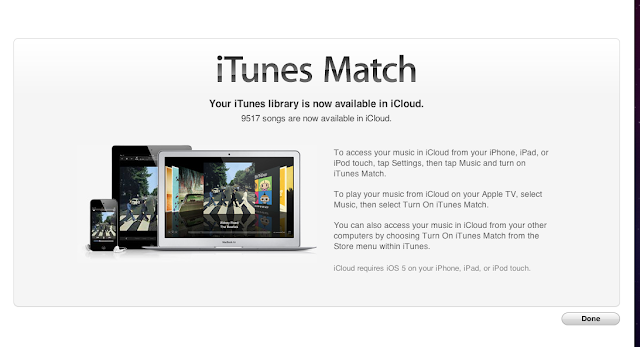 Oh...the reason there are fewer songs available in iTunes Match than in my original library is because some of the "songs" in my iTunes are really voice memos, which can't be uploaded to iCloud.

Currently, I have my school iTunes library on an external hard drive that I carry back and forth between school and home. It works, but it's kind of a pain to be sure I have it with me all the time. I have it backed up in two other places just in case it gets lost. I've been considering iTunes Match since I first learned about it a couple of months ago. Today I decided to give it a try. I'm sure most of you have an extensive library as I do. Currently I have 9516 songs (and I know I'm missing A LOT of my Music K-8 songs that still need to be imported). I was wondering how long this process would take and it is proving to be lengthy. I started at about 4:30 this afternoon. About an hour later, I checked the process and discovered that it was stuck on Step 2 at about a third of the way through. I clicked stop and restart and it seemed to solve the problem. By 7:30, it had completed Step 2 and found only 1556 matches in the iTunes store. That means it needs to upload all the rest of my 8034 songs to "the cloud." I really hope the process is complete by the time I wake up tomorrow. I'll keep you posted. 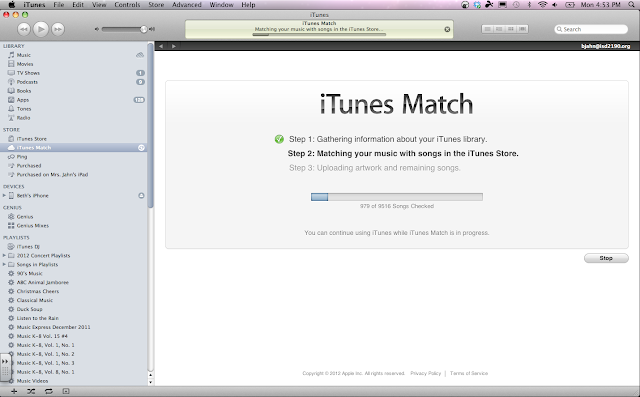 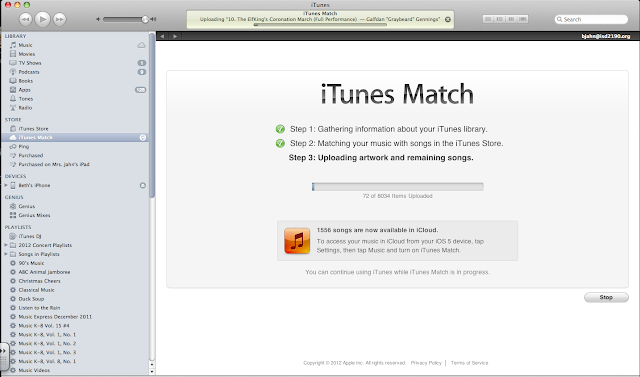 Note Squish This is a cute drill and practice app for note names. The cost is $0.99 for iphone (but it can be enlarged for iPad). It's kind of like Whack-a-Mole. You can choose the clef (treble, bass, C-Clef), range of notes used, speed, and letters or solfege. The object is to whack the mole with the correct note name on it. You can whack the other animals that appear for bonus points. 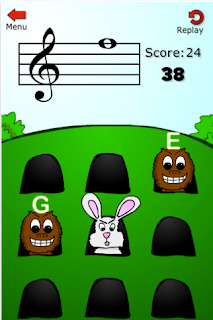